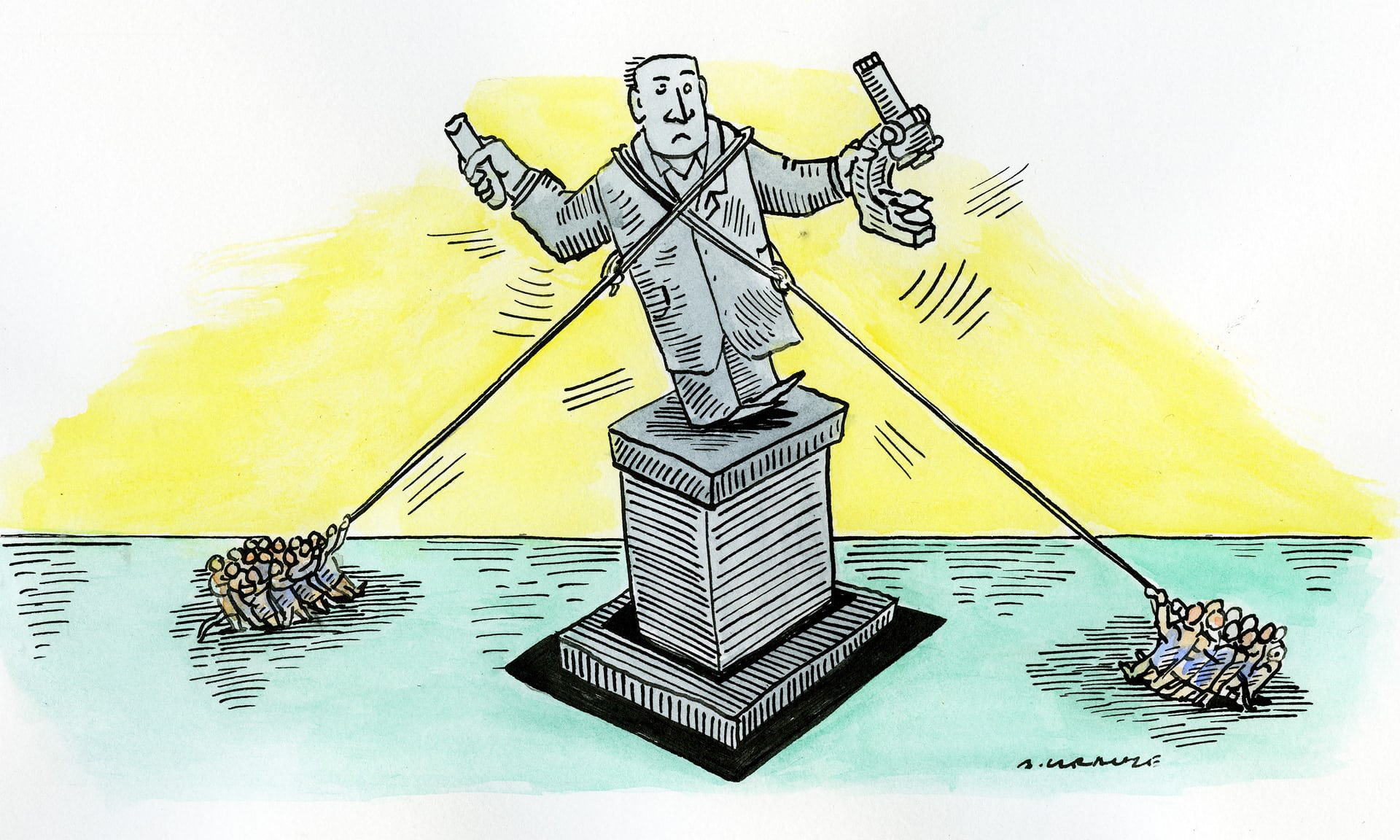 Yes, the Oxford statue of Rhodes should fall but why not novelist HG Wells, a eugenics enthusiast, and J. Marion Sim, the ‘father of gynaecology’ who experimented on slaves, too?

Science’s most elite magazine, Nature, published an editorial recently arguing that calling for monuments to figures such as J Marion Sims – often called the “father of gynaecology” – to be removed amounts to “whitewashing” history. Sims is widely praised for developing techniques in gynaecological surgery and founding a women’s hospital in New York in the mid-1800s. But Sims experimented on enslaved black women and infants, operating up to 30 times on one woman to perfect his method. Last month, women wearing bloodied hospital gowns staged a protest by Sims’s statue outside the New York Academy of Medicine.

Nature’s editorial sparked outrage and the magazine has now backpedalled. As critics pointed out, the magazine’s argument was essentially the same as that for keeping Confederate monuments such as the statue of Robert E Lee at the centre of recent protests in Charlottesville, Virginia. The idea that statues need to stay put for history’s sake was also invoked in the debate about Oxford University’s statue of British imperialist Cecil Rhodes, which remains in place despite protests.

As this latest controversy shows, science also has its monuments to white supremacy. Like Confederate monuments, these statues should be removed. They are daggers to the open wounds of communities that have long known that white supremacy reaches far beyond the sphere of conventional politics into medicine and science. But removing these monuments won’t be sufficient on its own. The row about Sims reminds us how hard the scientific establishment works to present an image of science as “apolitical”. What is needed is an honest re-examination of science’s history and politics – an examination of the kind that scientists have often tried to silence.

While Nature’s editorial purported to object to “whitewashing” the past, the magazine has done plenty of whitewashing itself. A profile of novelist HG Wells last year described him as a “science-populariser” driven by a “desire to use writing to make the world better”, often by projecting “utopian” visions. It left out Wells’s enthusiasm for eugenics.

Wells gave a glimpse into his flavour of utopia when he wrote in 1901 that “those swarms of black, and brown, and dirty-white, and yellow people” that fail to be “efficient” would have “to die out and disappear”. He also produced long screeds on Jews. According to Nature, though, Wells embodied the essence of “the scientific method”, which “conferred on its user the authority to rethink and challenge stale ideas”. When a £50,000 bronze statue of Wells was unveiled last year in Woking, Surrey, an official said the statue was meant to “inspire future generations of young people to continue in Wells’s legacy”.

There are also institutional monuments within science to be revisited. Britain’s prestigious biomedical research institute, the Crick, is named after Francis Crick, famous for his Nobel-prizewinning work on the double helix structure of DNA with James Watson. Both were proponents of eugenics. In the early 1970s, Crick defended other prominent racist scientists who proposed a plan where individuals deemed unfit would be paid to undergo sterilisation. Crick wrote in one letter that “more than half of the difference between the average IQ of American whites and Negroes is due to genetic reasons”, which “will not be eliminated by any foreseeable change in the environment”. He urged that steps be taken to avoid the “serious” consequences. Crick also proposed that “irresponsible people” be sterilised “by bribery”. In the brochure of the institute bearing his name, Crick is nonetheless presented as a scientific hero known for his “intelligence and openness to new ideas”.

Unfortunately, mainstream histories of science often repeat these hero mythologies. Horace Judson’s book The Eighth Day of Creation, perhaps the most celebrated history of molecular biology, verges on hagiography as it chronicles the lives of “great men” such as Watson and Crick – leaving eugenics unexamined, while playing down Rosalind Franklin’s role in the discovery of the double helix.

The point is not that scientists should be held to higher standards of behaviour. Rather, it is that racist and sexist ideologies can and do make their way into scientific theories. It is essential to recognise this, since these theories can provide the intellectual gloss for discrimination. A controversial memo recently circulated by a Google engineer, for example, based its claim that women are less capable than men in certain jobs on evolutionary psychology – a claim that, as physicist Chanda Prescod-Weinstein subsequently wrote, gains legitimacy from the unfortunate fact that “it’s 2017, and to some extent scientific literature still supports a patriarchal view that ranks a man’s intellect above a woman’s”. There’s no shortage of examples of scientists who have found ways to see sexist or racist ideas as “universals” of nature.

Nonetheless, there has been a persistent effort to manufacture a public image of science as being above the fray of politics – especially since the election of Donald Trump. In the build-up to April’s March for Science, in Washington and across the US, for example, some scientists were chastised for tainting the project with politics (or worse, “identity politics”) by talking about having been marginalised within the scientific community or bringing up the roles science plays in warfare.

Racist and sexist ideologies can and do make their way into scientific theories
While some alternative marches for science have since embraced science alongside social justice, the official March for Science group didn’t. Issues deemed “political” took a back seat to what was presented as the greater threat: the possibility that Trump and the Republicans would slash the budget of the National Institutes of Health, the largest sponsor of biomedical research in the US. A university professor even argued in an article that social scientists (those scholars who might challenge the whitewashed histories of science) should stay home as they “risk doing more harm than good”.

So how should the scientific community come to terms with its history? One critic of Nature’s editorial suggested that since science is a “self-correcting discipline”, scientists’ decisions about who among them deserves to be honoured might self-correct too. But this appeal only sustains the myth of value-free, apolitical science. There’s no magical feature of the scientific enterprise that insulates it from society and endows it with “self-correcting” powers. Even now, the new fascination with CRISPR – a system that can be used to edit the genomes of human embryos –has revived old visions of genetic determinism of the sort that fuels eugenics. Science is made up of many diverse and fragmented disciplines and, as in any other area of knowledge, it takes work to keep old demons such as racism at bay. Changes to the scientific enterprise come through constant struggle. It’s often said that figures such as J Marion Sims simply conformed to the norms of their time. But fresh looks at history can revise conceptions of past norms. Antebellum African-Americans, as Britt Rusert has shown, boldly challenged the racist science of their day by drawing on Charles Darwin’s new evidence that all humans share a common ancestor. There were more options available at the time than is conventionally admitted. Just as the movements to remove Confederate statues, or those of British colonial rulers, force us to re-examine officially sanctioned versions of history, so the movement to topple monuments to racist scientists offers an opportunity to rewrite the histories of science.